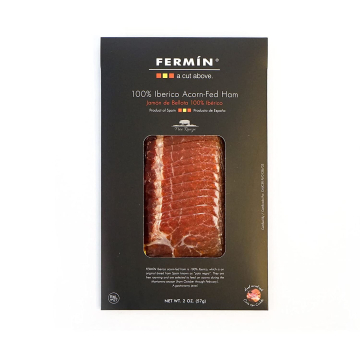 There are different details to know:
- Serrano ham is the "simple" form of ham which comes from domestic pigs.
- Iberico ham originates from the iberian pig, which identifies by the characteristic black claws, the "pata negra".
- There are different grades of purity: If the mother is 100% iberian, the ham is allowed to be called "Iberico". But only if the father is 100% iberian, it's a "100% raza iberico". If the father is a 50% iberico breed, the result is a "75% raza iberico" ham. If the father is just a different kind of breed, the ham is called "50% raza iberico".
- There are different ways the pigs are fed:
the highest standard is the bellota, which means the pigs live on open range with only feeding acorns. A different style of feeding is "cebo" which contains mainly fodder, also the pigs are mainly raised on farms. The addition "de campo" means that pigs are raised on farms as well as on open range.

You see: there are many different grades to choose from. To make sure to always get the highest grade of purity and so the best possible indulgence, pay attention for the designation: "Jamon de Bellota 100% iberico"!
from $ 25.99 * additional costs & charges may apply
sold by: